Stent under-expansion after percutaneous coronary intervention may occasionally be encountered unexpectedly. Management of under-expanded stents involves manipulation of the mechanisms that restrict full opening of the stent struts. In most cases, the occurrence of under-expanded stents is a consequence of heavy circular or rotating intimal calcification, and less commonly, tight circular intimal fibrotic band is to blame. Thick intimal calcifications can be easily identified by fluoroscopy, intra-vascular ultrasound, and OCT, and stent under-expansion in this setting happens due to inadequate lesion preparation and placement of the stent before full lesion expansion was achieved by balloon dilatation.  On the other hand, tight fibrotic band can not be identified by fluoroscopy, IVUS, or OCT, and the interventionist has little or no early warning of stent under-expansion in such cases until it occurs.  Under-expansion of a full-sized balloon at very high pressure is a potential tell-tale sign, and in this situation the lesion should be fully dilated by other means before the stent is placed. Otherwise, the stent becomes under-expanded - and this can sometimes occur when performing direct stenting for seemingly easy lesions in diagnostic angiography. Treatment of stent under-expansion secondary to heavy intimal calcification can be done using very high pressure balloons (such as OPN balloons) and dedicated inflation devices, rotational atherectomy, or intra-vascular lithotripsy (IVL) balloons. Rotational atherectomy is often difficult in this setting as it usually require prolonged and repeated attempts before the burr finally goes through. In this setting, the burr frequently becomes stuck. In our experience, rotational atherectomy never works for under-expanded stents with two or more stent layers. Very high pressure balloons might not be available in certain countries or regions. The novel IVL balloon seems to be the ideal solution for under-expanded stent. However, its market penetration is not high and the device is still not available in many regions and countries. Therefore, contrast-facilitated excimer laser remains a vital option. Excimer lasers are more available as they come to the market way earlier and are used for other purposes. The mechanism of treatment for under-expanded stents involves contrast-amplified photothermal effects, rather than conventional photochemical or photokinetic effects. The molecular bonds vibrate during the absorption process, resulting in heat production, and the intracellular water is vaporized, leading to cell rupture and creation of vapor bubbles. In the presence of blood flow or contrast medium, this thermomechanical (or actually, acoustic-mechanical) effect is boosted, creating rapid expansion and imploding of vapor bubbles as well as acoustic pressure shock waves at and distal to the area of laser activation. There is significant pulse pressure generated in the presence of 25% blood or 1% contrast medium, and laser activation in the contrast could generate a pulse pressure more than 100 atm. Contrast-facilitated excimer laser is used in highly resistant lesions, like the under-expanded stents, and has to be confined to the stented segment to avoid acute vessel injury or dissection.  On the other hand, if the stent under-expansion is secondary to tight fibrotic band, only very high pressure balloons and rotational atherectomy will do the work, whereas contrast-facilitated excimer laser or IVL balloons would not be effective.1-7
Herein, we present two interesting cases of under-expanded stents. The first was a double-layered stent with the second-layered stent under-expanded due to circularly calcified ISR inside a fully expanded BMS in the first layer. This case was successfully treated by OCT-guided contrast excimer laser. The second case was an under-expanded stent  left over from previous PCI. The lesion failed to respond to contrast excimer laser, but was complicated by vessel rupture secondary to balloon rupture on very high inflation pressure. Post hoc review of the OCT confirmed that the stent was under-expanded due to tight fibrotic tissue rather than circular calcification.

Our experience treating other cases has shown that double- or multi-layered under-expanded stents, secondary to heavy intimal calcification, especially with additional calcified intra-stent restenosis, are also not responsive to contrast-facilitated excimer laser. Therefore, OCT studies prior to embarking on excimer laser treatment are needed in these cases, not only for gauging the likelihood of a positive response but also to prevent laser-induced complications.

A 60-year-old man with type 2 diabetes, hypertension, and hyperlipidemia, as well as a history of coronary interventions with bare metal stenting for LCX and LAD, underwent drug-eluting ballooning for ISRs in both LCX and LAD in March 2019. Stent under-expansion at the proximal LAD was noted and he was then re-admitted this time for OCT-guided contrast-facilitated excimer laser therapy. Follow-up diagnostic angiogram revealed stent under-expansion at the proximal LAD, as shown in figures 1a and 1b. PCI was approached with XB 3.0 x7F guide via right radial access. Initially, the guide support was not sufficient and the 1.4 mm laser catheter could not go through the lesion, resulting in contrast leakage from the guide into the aorta (Figure 2a). Predilatation with a 2.5x8mm NC BC could not fully dilate the lesion, even up to 30 bars (figures 2b and 2c). A 7F Guidezilla was used to extend the guide catheter and the lesion was treated with excimer laser 6 times at 60 mJ/mm2, 40 Hz, with slow advancement of the laser catheter during activation and facilitated by 1:1 contrast: saline dilution (Figures 3a and 3b). With further BC dilatation, the lesion could be fully opened and finalized with drug-eluting BC treatment (Figure 4a and 4b). Pre- and post-PCI OCT showed disruption of the calcified ISR and full opening of the double-layered stent (figure 5). The patient was discharged from the hospital the next day and has remained completely asymptomatic ever since. 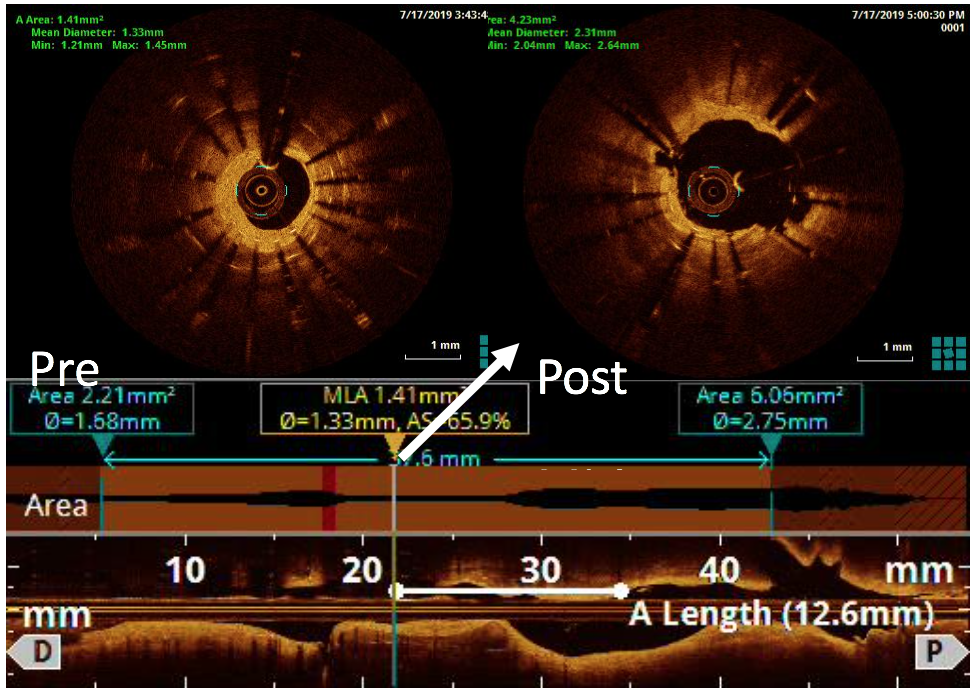 A 64-year-old male with a history of hypertension, chronic renal disease (stage 3), and right lower limb PAD with critical limb ischemia had received PTA twice in 2018. He also had CAD, TVD, with NSTEMI in 2018 and had undergone PCI for RCA, LAD and LAD in 2018 and 2019. Due to under-expanded mid-LAD stent, he subsequently underwent PCI several times due to recurring ISR. The diagnostic angiogram in September 2019 is shown in Figures 6a and 6b and the under-expanded stent was still not dilatable (figures 7a and 7b) using high-pressure non-compliant balloons. He subsequently underwent treatment with contrast-facilitated excimer laser. After diagnostic OCT and balloon predilatations, the lesion was treated with a 0.9mm laser catheter (X80) at 80 mJ/mm2 and 80 Hz 4 times in total, facilitated by 1:1 diluted contrast medium. However, it remained undilatable despite raising the pressure of the NC balloon to 30-35 atm (figures 8a and 8b). We switched to a 1.4mm laser catheter. However, this created local vessel perforation due to non-coaxiality, which was finally sealed off by prolonged balloon occlusion (figure 9a and 9b). Further NC balloon dilatation inadvertently increased the pressure to more than 35 atm, which ruptured the balloon and resulted in a powerful jet perforating the vessel wall proximal to the lesion (figure 10), followed by massive exudation and tamponade. Fortunately, the patient was stabilized by prolonged BC occlusion and pig-tail drainage of the pericardial blood (figure 11a and 11b). Post hoc review of the diagnostic OCT did show lack of circular intimal calcification around the under-expanded stent, which was secondary to tight fibrotic band in the vessel wall (Figure 12). The patient was successfully re-treated during another admission with rotational atherectomy, high-pressure balloon dilatation, and DEB, and his postoperative course was uneventful.

Figure 9a and 9b, 1.4mm laser catheter and perforation

Figure 11a and 11b. BC tamponade and pig-tail drainage 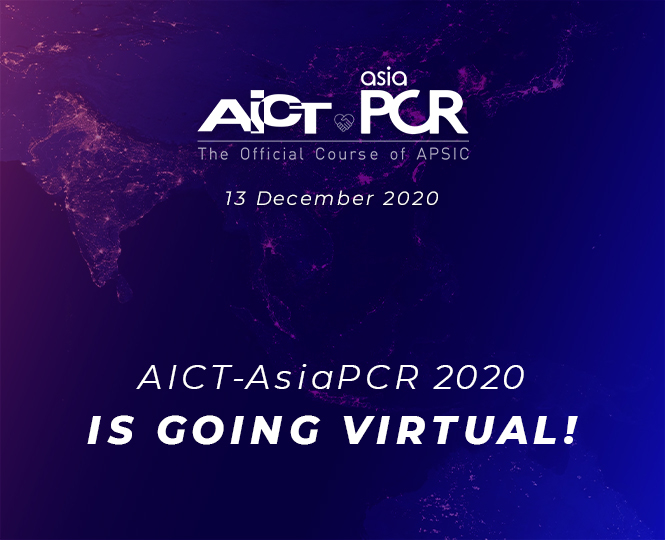 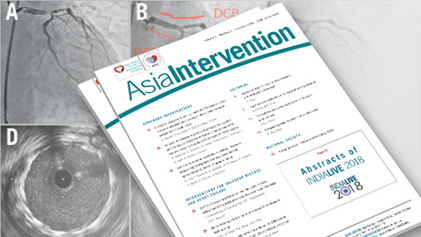